Protasio Chipulu
Protasio was initiated to issues of disability way back in 1976 when as a budding second year student at the University of Zambia, was selected in a group of ten students to carry out a study on disabled people. The study was in commemoration of the year of persons with disabilities. The study took him to a number of rehabilitation centres for persons with disabilities. In this study, he interviewed several persons with disabilities and he recalls meeting blind couples with children. The memory which still lingers in his mind was the challenge of bringing up children by blind couples. Working with persons with disabilities, especially children grew in a passion and this was rekindled when he joined Junior Chamber International otherwise known as Jaycees. Jaycees is an organization for young people between the ages of 18 and 40. The main objective of Jaycees is leadership training for young people. He rose to the position of life member and he bestowed with the title Senator within the Jaycees circles. In this organization one of the main things which struck him most was a tenet in the creed which states that ‘service to humanity is the best work of life”. The tenet helped him to focus on Children with disabilities. He carried out a number of projects for children with disabilities including facilitating construction of a classroom block as a special education school at one of the hospitals in Lusaka. By coincidence with passion for children with disabilities his own daughter was born with some complications in 1989. He did not know until much later when he realized that she did not grow normally. The doctors told him that she had cerebral palsy (CP). This revelation of Cerebral Palsy to the Chipulus, marked a journey in the management of this condition. This book is about his daughter with cerebral palsy and how the family has managed to cope with the condition. The brief is not complete without talking about his profession. He is a Socio – Economist with long experience in managing rural development programmes and projects. He obtained a Bachelors` degree in Sociology and Economics from the University of Zambia in 1979. He did his further studies and obtained a Master of Science degree in Economics in Swansea, Wales in 1981. His professional career is completed with the attainment of project management certificate. In October 2009, he qualified as an International Development Project Manager (IDPM). This certificate was given by Setym International and the University of Quebec, Montreal, Canada. Protasio is an independent international development project management consultant with a passion of helping persons with disabilities. He has also time and interest in network marketing. Protasio lives in Lusaka, Zambia, with his wife and five children.

Our Daughter With Cerebral Palsy 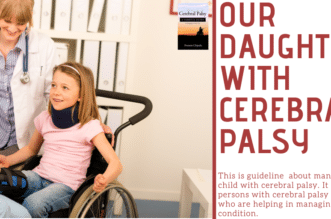 To Eat Or Not To Eat: Foods To Avoid As You Age